But we’re already in outer space! 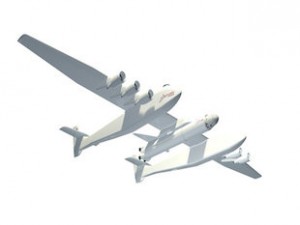 Microsoft co-founder Paul Allen is teaming up with aerospace pioneer Burt Rutan to build a giant machine that is part airplane and part spaceship. The new vehicle will be able to transport people and cargo into Earth’s orbit and is scheduled to be commercially available by 2016. Go to story

All of us are insignificant. Even this planet Earth is insignificant. It is just a speck on which we are sitting and floating in outer space. Scientists want to go into outer space, but everyone is already in outer space. Bob Dylan once sang, “We sit here stranded, all trying our best to deny it.” We are just sitting on this planet. In order to delude ourselves, we are very busy traveling around the planet, going nowhere.

This material world is called durga, which means prison. Every one of us is in prison. At one time, criminals were sent to Alcatraz Island so that they could not come into the mainstream of society and cause disturbance. Similarly, this planet and other planets–the moon, Mars, Mercury and the sun–are called dvipa, which means island. This planet is an island in the ocean of space.

Scientists are trying to get off this island by rocket ships, but even if they could get off this earthly island and go to the moon, Krishna says, abrahma-bhuvanal lokah punar avartino’rjuna: “From the topmost planet within this universe down to the lowest, all of them are places of misery wherein repeated birth and death take place.” (Bhagavad-gita 8.16)

Science is attempting to escape the laws of God, but it is not possible. Everywhere there is birth, old age, disease and death.

One Response to But we’re already in outer space!