Bhagavad Gita As It Is Prevails in Russia 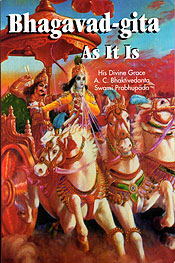 A court in Russia has dismissed a case that sought a ban on the Bhagwad Gita. Hindus in Russia on Wednesday won the case when Tomsk city court in Siberia dismissed the plea from state prosecutors.

The court rejected the appeal against a Dec 27 verdict given by a lower court in Tomsk. Go to story

“The book does not contain any signs of extremism and does not incite hatred on ethnic, religious or any other grounds. On the contrary, the book written in the commentary tradition of Bengali Vaishnavism, one of the most popular branches of Hinduism, is considered sacred by a section of believers”, the scholars emphasized, warning that the continued trial of the Hindu scripture in Russia is “driving a wedge in Russian-Indian relations.” Similar concerns were voiced earlier at an all-Russian conference at Tomsk State University titled Bhagavad Gita in history and modern society, where scholars expressed perplexity at the prosecutor’s move to declare a translation of the Hindu scripture extremist. Go to story

excerpt from Introduction to Bhagavad-gita As It Is:

The point is that anyone who accepts the principle of bhakti-yoga and accepts the Supreme Lord as the summum bonum of life, as the highest target, the ultimate goal, can approach the Lord in the spiritual sky. If one adopts the principles enunciated in Bhagavad-gita, he can make his life perfect and make a perfect solution to all the problems of life which arise out of the transient nature of material existence. This is the sum and substance of the entire Bhagavad-gita.

In conclusion, Bhagavad-gita is a transcendental literature which one should read very carefully. It is capable of saving one from all fear.

“In this endeavor there is no loss or diminution, and a little advancement on this path can protect one from the most dangerous type of fear.” (Bg. 2.40) If one reads Bhagavad-gita sincerely and seriously, then all of the reactions of his past misdeeds will not react upon him. In the last portion of Bhagavad-gita, Lord Sri Krishna proclaims:

“Give up all varieties of religiousness, and just surrender unto Me; and in return I shall protect you from all sinful reactions. Therefore, you have nothing to fear.” (Bg. 18.66) Thus the Lord takes all responsibility for one who surrenders unto Him, and He indemnifies all the reactions of sin.

One cleanses himself daily by taking a bath in water, but one who takes his bath only once in the sacred Ganges water of the Bhagavad-gita cleanses away all the dirt of material life. Because Bhagavad-gita is spoken by the Supreme Personality of Godhead, one need not read any other Vedic literature. One need only attentively and regularly hear and read Bhagavad-gita. In the present age, mankind is so absorbed with mundane activities that it is not possible to read all of the Vedic literatures. But this is not necessary. This one book, Bhagavad-gita, will suffice because it is the essence of all Vedic literatures and because it is spoken by the Supreme Personality of Godhead. It is said that one who drinks the water of the Ganges certainly gets salvation, but what to speak of one who drinks the waters of Bhagavad-gita? Gita is the very nectar of the Mahabharata, spoken by Vishnu Himself, for Lord Krishna is the original Vishnu. It is nectar emanating from the mouth of the Supreme Personality of Godhead, and the Ganges is said to be emanating from the lotus feet of the Lord. Of course there is no difference between the mouth and the feet of the Supreme Lord, but in our position we can appreciate that the Bhagavad-gita is even more important than the Ganges.

This entry was posted in Law - Courts, Legislation, Enforcement and tagged Bhagavad Gita, Bhagavad gita in Russia. Bookmark the permalink.
Return to top ↑