Who is Lord Chaitanya?
Krishna appeared as Lord Chaitanya 500 years ago in India to bring the medicine for the diseased human society in the form of this movement. He brought the chanting of Hare Krishna. 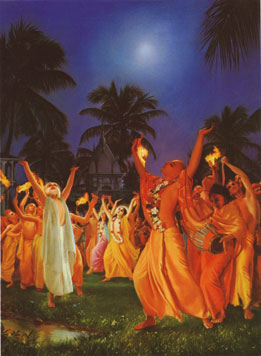 The conclusion of all human endeavors is to chant Hare Krishna. Our books are meant to convince the diseased, conditioned soul that sankirtan, or chanting Hare Krishna, is the essence of all human activities. There cannot be any activity more auspicious than vibrating the holy name of the Lord. That is the essence of all Vedic conclusions. Revealed scriptures say that one who chants the Hare Krishna maha-mantra is to be understood as having already practiced all kinds of penances and austerities and to have studied all kinds of Vedic literatures.

O My Lord, You have made it so easy to approach You by the chanting of Your holy name. (Shikshastaka, Verse 2)

In by-gone ages—Satya-yuga, Treta-yuga and Dvapara-yuga—there were other process of self-realization, such as meditation, sacrifice and temple worship. But this age, Kali-yuga, is characterized by irreligion, hypocrisy and dissension. Because the living entities in this age are so degraded, the Lord has made a special concession by appearing in person and introducing something which everyone can actually accept. That is the sankirtan movement, the essence of which is the chanting of the holy name of the Lord.

That Lord Chaitanya is an incarnation of God is not our opinion, but is evidenced by information contained in the Bhagavad-gita, Srimad-Bhagavatam and other Vedic literatures. The revealed scriptures predicted that the Lord would appear in this age to propagate the sankirtan movement. Thus, Lord Chaitanya is non-different from Krishna, God, but in this age He has appeared in the guise of a devotee in order to show the fallen people of Kali-yuga how to worship the Lord and become perfect by chanting Hare Krishna. This is the significance of Lord Chaitanya’s appearance.

God is absolute, and therefore anything directly connected with Him, such as His holy name, form, pastimes, paraphernalia and entourage, is identical with Him. In the material world of duality, objects are different from their names. A thirsty man’s cry—”Water! Water! Water!”—will never satisfy his thirst, because the name water and the substance water are completely different. In the absolute world, however, there are no such differences. There an object and its name, or a person and his name, are one. Therefore, simply by vibrating the holy name of God, one associates with God directly.

Lord Chaitanya Mahaprabhu, an incarnation of Krishna, recommended that one chant the maha-mantra twenty-four hours a day and thus make one’s life perfect. He said:

Chanting Hare Krishna gradually frees one from material concepts and elevates one to samadhi, a trance-like state in which one realizes the Supersoul (Paramatma, or Krishna residing in the heart) through his transcendental mind and intelligence. God realization is the goal of yoga.

The living entity is called jivatma (the atomic self), and Krishna is called Paramatma (the Supreme Self). In perfect Krishna consciousness, one realizes the eternal relationship between the atomic soul and the Supreme Soul, Krishna, without misidentifying himself with the Supreme.