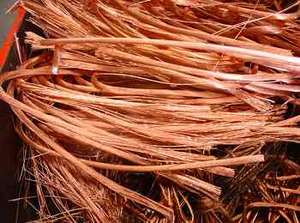 The ongoing price collapse of copper signals that the markets have collectively decided that there is going to be no resurgence of the global economies—at least not for the next 9 to 18 months. Up until now, the economic data that has been coming out over the last couple of weeks seemed to indicate that there’s going to be a double-dip—but in my mind, this fall in the price of copper confirms this notion that the general economy is going down.

And remember: Market sentiment can not only be a predictor of future economic performance, but its determinant. If today the markets feel that the economy is going to suck tomorrow, often that very sentiment is what makes the economy suck canal water.

So if copper is falling like a mo-fo—which both signals and convinces the market that the economy is gonna suck—what does this mean for monetary policy?

Prima facie, the fall in the price of copper is deflationary: Less demand means that the prices fall—meaning the dollar acquires purchasing power.

What does it mean for monetary policy that copper has fallen so low?

It means that Bernanke will carry out more “non-traditional” Federal Reserve stimulus.

Ben Bernanke is famous for being terrified of deflation—and to his particular mindset, this is a reasonable fear. More to the point, Bernanke’s deflation-phobia actually matters—because after all, he is the Chairman of the Federal Reserve. He controls U.S. monetary policy. Go to story

If you introduce real metal coin, then there will be no inflation.

PRABHUPADA: What is this nonsense, keeping some paper and thinking he has got money? How cheating it is going on, from government’s side. And therefore artificial inflation. You can print, so the price is increased. Because you haven’t got to pay him real money, you print and pay him, and he will ask, “Give me this money. Then I’ll supply.” “All right, take.” You print and pay.

RAMESVARA: It’s definitely a means that the government has for controlling. Because they can withdraw money, pull it back out of circulation by increasing the interest the banks give, or they can get more money in…

RAMESVARA: They control the amount of interest on loans. It’s all standardized from what they call the Federal Reserve system. This was introduced during the Depression by the bankers.

RAMESVARA: Actually most purchasing in America is done on credit now. Even a step beyond paper money is credit, no money, buying on no money, loans.

PRABHUPADA: That is in India also.

RAMESVARA: We don’t find these things in Vedic culture too much.

PRABHUPADA: There was never paper money.

HARI-SAURI: No. They used to…

PRABHUPADA: That barter system. You have got rice; I have got something else. So I give you something; you give me something.

PRABHUPADA: No, gold is acceptable by everyone.

RAMESVARA: The main point is the barter system.

HARI-SAURI: Yes, well its value is recognized by its purchasing power.

HARI-SAURI: So you can alter… Say, you have one gold coin. You can alter what it…

PRABHUPADA: No. If you introduce real metal coin, then there will be no inflation.

HARI-SAURI: There’s only a certain amount of metal.

PRABHUPADA: That’s all right. The exchange… The more demand, more price. So suppose here is a spectacle. I am demanding ten rupees. So both of you are customer, and you are asking for this spectacle. Then I am increasing my price. So if you can pay me by printing paper, you’ll accept any price. That means artificially price is increased. Is it not?

HARI-SAURI: So the idea is that with coins the man who has the goods, he can’t…

PRABHUPADA: Therefore… Suppose he has got ten coins; you have got ten coins. I am wanting fifteen coins. So there will be no competition. I have to accept either from you or you, ten coins.

HARI-SAURI: Right. Because there’s only that much money.

PRABHUPADA: But if I increase price and if you print… If you have got power to print, “All right. Take fifteen coins, er, fifteen rupees.” But you print and pay me. But if the gold, the coin, is there, you cannot increase on that.

HARI-SAURI: He can’t increase the price of the product, and the man who got…, ’cause there’s only a certain amount of money there.

PRABHUPADA: But I can increase the price provided you pay me. But by printing, it is easier. But if you have to collect coins, that will be difficult, so there will be no artificial increase of…

HARI-SAURI: Yes. Coins is a check…

HARI-SAURI: …on charging too much.

PRABHUPADA: That is wanted. And these rascals, they are artificially printing paper as money. And I am a rascal; I’m demanding more because I have got customer.

RAMESVARA: The difference between Vedic culture and…, the Kṛṣṇa conscious culture and the modern culture is very, very dramatic, very big difference. So the transforming of society…

PRABHUPADA: Everything I get. So I haven’t got to go outside for exchange. If you are satisfied in your farm—I am satisfied—then where is question of exchange? There is no need of artificial… So this banking, “fanking,” everything will collapse automatically. There is no money, who is going to keep money in the bank?

HARI-SAURI: Who needs it?

PRABHUPADA: (laughs) So this artificial way of banking, that will be also collapsed.