We recently received the following comment in response to “Hansadutta at SRJC (part 9) Krishna: The Supreme Personality”:

“We are told the Bhagavad Gita is the actual teaching directly from God. Yet I read that it was Sanjaya who envisioned the battle and conversation between Krishna and Arjuna while in the house of Dhritarastra. Was he channelling the story, he wasn’t actually present, is the Bhagavad Gita the vision of Sanjaya?”

Prabhupada explains that Sanjaya was the secretary of Dhritarastra, and he was seeing the battlefield and Krishna’s talking to Arjuna, just like we have live stream television. 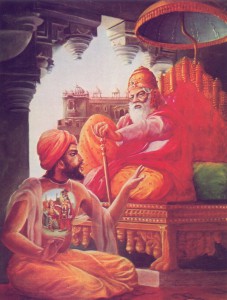 In the middle of Mahabharata Bhishma-parva, this Bhagavad-gita is inserted. Not inserted. Practically, in the battlefield of Mahabharata this Bhagavad-gita was spoken. And it is… You will be surprised. In those days television was in the heart, television. This, I mean to say, battlefield of Kurukshetra was television in the heart of Sañjaya. Dhritarashtra, the father of one party, Duryodhana, and his secretary, Sañjaya, were sitting in the room, and they were discussing what happened after this. Just like you get television or radio message in the football ground what is going on by sound and picture, so the same thing was being reflected in his heart and he was in the room. He was explaining the activities of the battlefield. This is the story, like that. (excerpt from lecture on Bhagavad-gita 3.17-20, New York, May 27, 1966)

Sanjaya gives credit to his spiritual master for the ability to see and hear Krishna speaking to Arjuna.

So Sanjaya recorded the Bhagavad-gita television, and then his spiritual master inserted it into the Mahabharata.

This Bhagavad-gita was spoken by Krishna to Arjuna, and it was recorded by Sañjaya, by the grace of Vyasadeva. And then Vyasadeva put the conversation in the Mahabharata. (excerpt from lecture on Bhagavad-gita 4.1, Bombay, March 21, 1974)

Originally this art was available to the individual person – they could see and hear things far away. Now that Kali Yuga has overwhelmed the conditioned souls, they have lost this subtle power of perception. Nature has externalized this and other abilities in a mechanical, and electronic way. Like for memory, we have tape recorder; for long distance travel, we have cars and airplanes, etc.

The soul has no need of any mechanical or electronic arrangements. The soul has no need of a gross material body of flesh and bones, stool, urine, blood, mucus, sweat and tears. Therefore also no need for eating, sleeping, defending and sex. All these struggles for sense gratification are a sort of punishment for the rebellious soul. It is like a criminal is confined in the prison and made to break rocks or do some other brutalizing hard labor. There is no need for this, but just to correct the errant citizens, the government arrests, isolates them in confinement and enforces hard labor on them.

Actually, the conditioned souls on this or any planet within this universe are all on death row, condemned to die, in one way or another. No one has been able to escape in the past, no one is escaping at the present, and no one will escape in the future. Every living creature from man down to the foolish moth flying into the glare of the fire – all are laboring hard to avoid birth, old age, disease and inevitable death. It is the planet of death. Instead of preparing to die, everyone is working hard for nothing, wasting time, deliberately IGNORING Death. It is definitely a FOOL’S PARADISE.

This entry was posted in Knowledge - Enlightenment and tagged Bhagavad Gita. Bookmark the permalink.
Return to top ↑