It is all your mercy 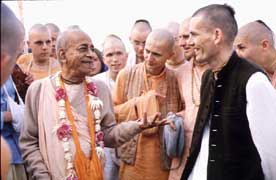 In Germany, while on a morning walk, a helicopter passed overhead. Prabhupada looked up and asked, “What is that?” Someone informed him, “A helicopter.” Then Prabhupada laughed and said once Shyamasundar arranged to have him picked up at Heathrow airport (London) and flown to the Manor at Letchmore Heath. He laughed again, saying he was very impressed, “But in the end I had to pay the expense of that luxury.” Then he told the story of a guru and his disciple. Once there was a guru who had a very capable disciple. They prepared to go on a preaching tour. The guru handed the disciple a bag of valuables and money for safekeeping during the journey. The first engagement turned out to be very well organized and there was first-class food, and all necessary arrangements in every way. The guru was very pleased and afterwards complimented his disciple for the extensive arrangements. The disciple was very humble and replied, “It is all your mercy, it is all your grace.” They continued the tour. At every engagement the arrangements of food, flowers, hospitality for the guests was first class, and the guru was really impressed and very pleased, each time taking his disciple aside to commend him on his excellent organization and opulent arrangements. The disciple was always very humble and repeated, “It is all your mercy and divine grace.” After some months of traveling, they finally returned to the ashram of the guru. The guru, having settled in and relaxed after a massage and bath, asked the disciple to please bring him the bag of valuables and money which he had entrusted to him at the onset of their tour. The disciple went and returned with the bag, but to the guru‘s astonishment he found the bag completely empty. Bewildered and angered, he asked the disciple, “Where are the money and the valuables I entrusted to you?” The disciple answered, “I spent it all making arrangements for your programmes. I told you again and again, ‘It was all your mercy and all your grace.’ “

Prabhupada laughed and said, “This was how Shyamasundar arranged for my helicopter flight from Heathrow to the Manor. It was all my mercy and my grace.”